The Irricana facility features ten sulfur pastille silos and two agitated sulfur melting tanks. Sulfur melting tanks can present a range of measurement challenges to plant operators, largely because the tank’s conditions can cause many issues depending on the type of measuring instrumentation utilized. In this particular case, the company was using a guided wave radar to measure level in its melting tanks. While guided wave radar can be an effective instrument for measuring liquids, in this application it experienced many issues, like frequent loss of signal due to constant vibration in the tank, and a frequent need for maintenance calls. Sometimes the hardware issues in the guided wave radar were severe enough to require a replacement unit. After costs piled up from maintenance calls and replacement units, the company sought alternative methods of level measurement for their tanks. 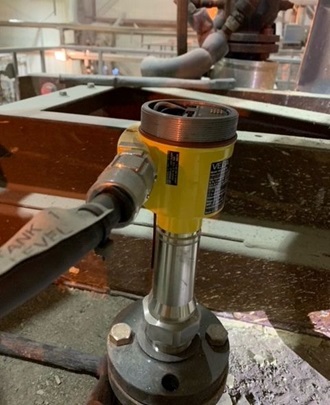 Exploring a better method of level measurement, the company sought out the expertise of VEGA. After the company explained the issues with their current solution, VEGA investigated a smarter way to meet their measuring needs. Because conditions in the melting tank caused continued maintenance and hardware failures with the guided wave sensor, VEGA determined that a non-contact radar sensor would be the best fit for the sulfur company.

VEGA and the company determined a VEGAPULS 80 GHz non-contact radar sensor to be the right fit for the melting tanks’ measurement needs. 80 GHz sensors emit a narrow beam angle that worked well with the sensor’s mounting location between the tank’s wall and agitation rod, reliably measuring through the vessel. With its high dynamic range, the sensor was able to easily detect the elemental sulfur, despite the sulfur’s lower dielectric constant (Dk). Any potential measurement issues caused by buildup were mitigated by the VEGAPULS radar’s Sensitivity Time Control (STC) feature, which blocks out unwanted reflections caused by close-range buildup and ensures continued measurement accuracy.

The VEGAPULS 80 GHz radar sensor delivered accurate and reliable measurements without the hassle of continued maintenance requirements. Thanks to the benefits of non-contact 80 GHz radar, the company is now able to utilize a larger percentage of space in their melting tanks, leading to greater operational efficiency.  Most importantly, the new sensors from VEGA facilitate increased safety, since operators no longer have to check the level within the tank themselves.