The flow measurements in these channels are vital because wastewater treatment plants are required to report them to the government. Without a report, plants can receive big fines, and failed instrumentation due to freezing conditions isn’t a valid excuse.

Mankato, Minnesota, located in the Upper Midwest of the United States sees these extreme cold temperatures every winter. The average high temperature doesn’t rise above freezing for all of December, January, and February.

Operators at the City of Mankato Water Resource Recovery Facility (WRRF) had gone to great lengths to keep instrumentation using ultrasonic technology operational through the bitter cold temperatures and snowy weather, but thanks to newer VEGA radar level sensors, they no longer need to worry about unreliable measurements. 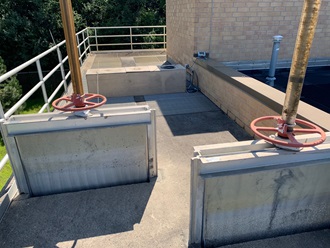 Mankato WRRF personnel built an insulated box over two ultrasonic transmitters to help keep them warm and functioning in the winter.

Every wastewater treatment plant in the United States measures influent and effluent – flow going in and out of the plant – and reports these measurements to a state or federal regulatory agency. Many facilities make these measurements using a level measurement sensor in a flume or weir.

The City of Mankato WRRF had been using a flume with an ultrasonic sensor. Cold temperatures and wintry weather, however, was affecting the accuracy and reliability of their measurement. With relatively warm water flowing below the sensor and the cold air around it, frost constantly formed on the sensor face. A small amount of frost on the face of the ultrasonic sensor caused measurement errors, and during long cold stretches, excessive frost would cause sensor failures.

To ensure a more reliable measurement, operators built insulated boxes around the instrumentation and added a space heater to maintain a more consistent temperature and prevent any snow or frost from building up on the sensor face. When temperatures dropped significantly, however, frost could still occur, and when it did, the sound waves were dampened, which prevented a measurement from being made. 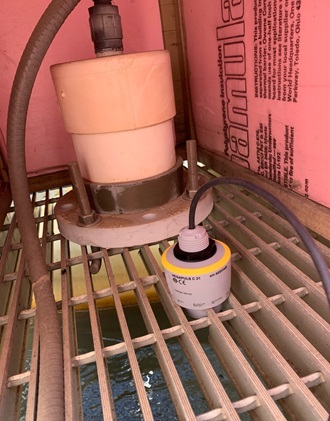 A radar level sensor and an ultrasonic transmitter are installed side-by-side to compare their performances.

Mankato’s WRRF Superintendent, Josh Gad, contacted his local VEGA contact to discuss the difficulties he’d been experiencing with the ultrasonic devices on his influent flume. VEGA offered a free trial of a VEGAPULS C 21 radar level sensor to install right next to the ultrasonic sensor for comparison.

During the trial period, the wastewater treatment plant kept the insulated housing over both sensors. The ultrasonic sensor still experienced the occasional failures, but the radar unit continued to work flawlessly. After the trial period, Superintendent Josh Gad opted to remove two old ultrasonic sensors measuring on parallel flumes and replace them with VEGAPULS C 21 radar sensors. The ultrasonic and radar sensors were similarly priced, so it was an easy decision to make the switch to a more reliable technology.

A true test in the cold

With the ultrasonic sensors removed, they removed the insulated box and space heater. This made it easier to access the sensors, but it also exposed the two new radar sensors to the elements. The upcoming Minnesota winter would be a true test for the reliability and accuracy of these sensors.

The influent channel gets frosty during the cold winter months, making it a challenge for some level measurement instrumentation to make a reliable, accurate measurement in the flume. 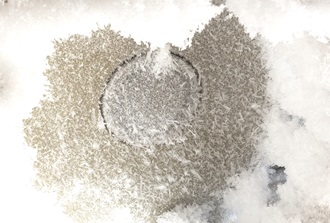 A thick layer of frost built up on the radar antenna (center circle) and on the flange.

Radar signals are immune to changing temperatures and the VEGAPULS C 21 can withstand temperatures as cold as -40°F (-40°C). In February 2021 in Mankato, temperatures didn’t warm above 0°F (-18°C) for a period of 130 hours (5 ½ days). Nighttime temperatures dropped to -25°F (-32°C) several nights in a row. The radar sensor continued to operate without fail through it all.

Throughout the cold stretch, a thick layer of frost formed on the face of the radar sensor, but it continued to output a strong, reliable measurement. The VEGAPULS C 21 is an 80 GHz radar sensor equipped with intelligent software, both of which work together to read through the frost and reliably make the measurement operators need.

You can count on radar measurements in challenging applications 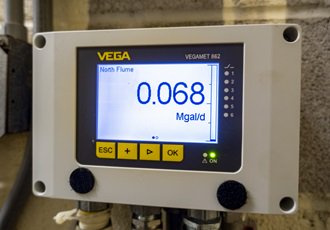 After years of regular maintenance and workarounds with ultrasonic transmitters, the Mankato Water Resource Recovery Facility had an easy, reliable solution they could count on year-round in their all-important open flow channel measurements. Shortly after the aforementioned cold stretch, superintendent Josh Gad said, “This thing is great! It was -24°F (-31°C) outside, and these things didn’t miss a beat!”