Level measurement under extremely harsh conditions in a diamond mine

In the Maluti Mountains in the Kingdom of Lesotho, in southern Africa, there is located the highest diamond mine in the world at 3,200 meters above sea level. The environmental conditions are correspondingly rough – abundant snowfall, temperatures that fluctuate between -18° C and +20° C and strong winds are part of everyday life. The conditions in the ore preparation process are also pretty rough. The mine transports the ore to the surface through two kimberlite pipes. The source rock is crushed and further processed to extract diamonds. The two pipes in the Lesotho mine contain only a very small proportion of diamonds. Their yield is less than two carats per hundred tons of rock. A huge effort is required to get these diamonds.

In a DMS (Dense Media Separation) plant, ferrosilicon in powdered form is suspended in water to obtain a fluid with the density of diamond. To this is added the previously crushed diamond bearing material, in order to separate the heavier minerals from the lighter rock. The DMS process produces a concentrate which generally amounts to less than one percent of the original material fed into the plant at the beginning of the process.
An alternative processing method is centrifugation, where the denser material is swirled at low and high speeds in cyclones. In the process, the diamonds and other dense minerals are pressed to the walls and then out the bottom of the cyclone.  The waste water rises at the centre of the cyclone and is sucked out and screened to remove the remaining particles.
Both methods have their advantages and disadvantages. The investment costs for a DMS plant are ten times higher than for a cyclone. The DMS plant, however, provides better yields. The water consumption and operating costs for a DMS plant are also significantly higher than is the case with centrifuge processing. Of course the efficiency of a plant also depends on the skill of the operator and the applied technology. Decisive factors for the smooth operation of a DMS plant and, ultimately, the whole process, are, among other things, a high level of automation and measurement technology that delivers reliable measured values. 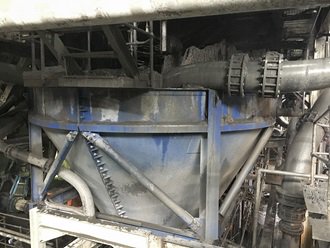 Extremely rough conditions prevail in diamond mines. Dust and dirt, ever present in the ore processing facilities, are a real challenge for level measurement technology.

In the flotation tank, the level of the flotation liquid containing the enriched material has to be precisely measured. The medium is fed into the flotation tank through pipes from different directions. These pipes cause extreme turbulence and water splashing inside the tank.
An older radar sensor with a transmission frequency of 26 GHz, which was installed there a few years ago, always had problems. Accumulation of dust and debris caused build-up on the antenna, which resulted in false readings again and again. Although radar technology is a non-contact measuring method and therefore ideal for dirty environments, the sensor no longer worked optimally because of these extreme ambient conditions.

A picture is worth a thousand words: VEGAPULS 64 delivers reliable measuring results in this environment.

VEGA's South African subsidiary suggested replacing the existing technology with the new VEGAPULS 64. Its narrower beam angle of only 3° promised a solution to the problems caused by the inlet pipes. This considerably tighter focusing of the radar beam made it possible to better distinguish the actual measurement signal from the interference signals. The sensor offers significant advantages because of its higher dynamic range of 120 dB.  Thanks to VEGAPULS 64, a higher accuracy, reproducibility and reliability in general within the application is now granted.
Varying temperatures and pressures affect the measuring results just as little as the properties of the liquid to be measured, e.g. density or viscosity. This is important, especially in the inhospitable temperatures that prevail in the diamond mine.

VEGAPULS 64 measures under pressures from -1 bar to +20 bar and process temperatures between -40° and +200° C. Despite the considerably shorter wavelength of the 80-GHz sensor, it is hardly affected at all by deposits or condensation. The distance-dependent dynamic adaptation reduces the effects of interference directly in front of the antenna system and at the same time allows a very high signal sensitivity at a greater distance.

Besides the exceptional stability of its measuring signal, the radar sensor is also characterized by mechanical robustness, i.e. it is virtually wear and maintenance free. Even if the sensor has to be freed of large quantities of mud now and then, the process can go on unhindered. Everything in the flotation tank has been running smoothly since VEGAPULS 64 was installed.
VEGAPULS 64

You're currently on our site for France.
Please select your country or region