Located just minutes from the VEGA Americas campus in the Oakley neighborhood of Cincinnati, Ohio, MadTree Brewing is as much a community gathering place as it is a brewery. MadTree is as famous for being a friendly spot to bring the kids and the family dog as it is for its variety of craft beers; its commitment to local non-profits and community partners is as noteworthy as its artistic cans. MadTree operates under the belief that “beer builds community and community builds beer” and it makes good on that promise with every brew.

Brewery Engineer Kyle Moore is tasked with overseeing the build out and operation of MadTree’s $18M, 83,000 square foot brewery and taproom, expected to produce 35,000 barrels of beer this year. Moore, a graduate of University of Cincinnati’s chemical engineering program, worked on a team to design the brewery using a custom Sprinkman brewing system and has responsibility for its ongoing operation and maintenance. Having worked with VEGA instruments during his college co-op, he requested VEGA products for several crucial phases of the brewing process. 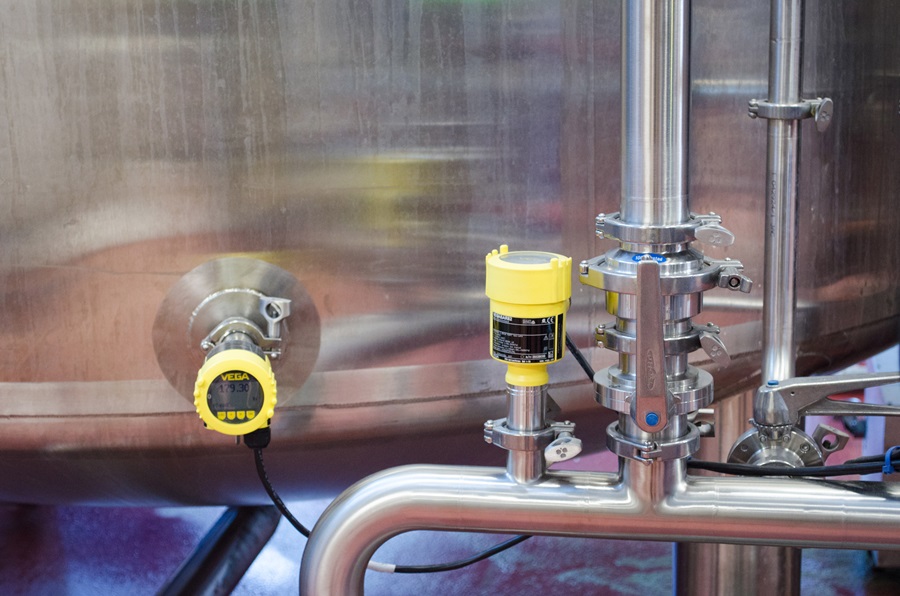 Whether you prefer a floral ale, a crisp pilsner, a tangy sour, or a hoppy IPA, good beer starts with good water. MadTree receives its water from the city of Cincinnati and engineers it to produce a specific flavor profile in the finished beer. Using reverse osmosis, MadTree strips the salts from the water and adds its own back in to create a specific salt profile for each and every beer.

“Salt in water has a huge effect on flavor, so we rebuild the water’s salt profile from the ground up,” Moore explained to VEGA. Once the brewery’s water is perfected it is stored in a 20,000 gallon tank. When it’s time to brew, water is pumped from holding to the hot liquor tank (HLT), and heated to 185° F. Water from the HLT is blended with room temperature water to obtain a precise temperature as needed for each recipe in the mashing process.

MadTree uses a pair of VEGABAR 82 pressure transmitters to monitor MadTree’s water. One sensor is used for liquid level measurement inside the tank and the other sensor is used to regulate pump speed out of the tank. The same setup is used on an opposite stream to measure cold water in the cold liquor tank, or CLT. Keeping in step with craft brewing’s focus on process efficiency, water used at MadTree is reclaimed and reused. 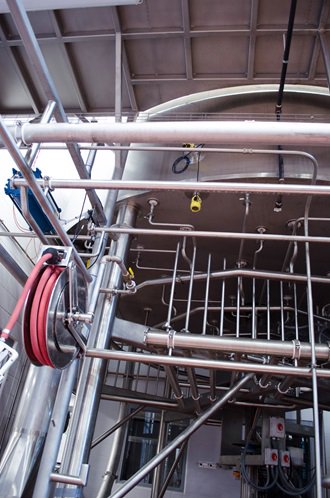 MadTree uses a three-vessel brewing system. The first of those vessels is the mash lauter tun, where milled grain is mixed with hot water. Inside the tun, where temperatures range from 150 to 180° F, a plow and auger mixes the grain and water uniformly, creating a wet and solid oatmeal-like mixture. The grain forms a bed that acts as a filter atop a screened plate above the bottom of the tun. Hot water is sprayed on the grain bed to transfer liquid and the proper amount of sugar. MadTree’s brewhouse uses a differential pressure (DP) system to monitor the pressure between the screen and the bottom of the tun. Keeping an eye on this measurement helps the Production Team control efficiency early in the brewing process.

“If you pull too hard on a grain bed, you crush that filter, which means it takes forever to transfer fluid over. We’re trying to maintain a good, easy medium there. Usually transfer time runs about an hour-and-a-half; if you start collapsing that grain bed, transfer time becomes two-and-a-half hours or more. That eats into production time.”

The DP system outputs pressure but they also use it to control rate of transfer. If the pressure measurement increases, they can slow pumps into the mash lauter tun. This reading also helps them evaluate grain performance and spot trends and inefficiencies using a software program. Once it leaves the tun, the mash—now called wort—is piped to a boil kettle. 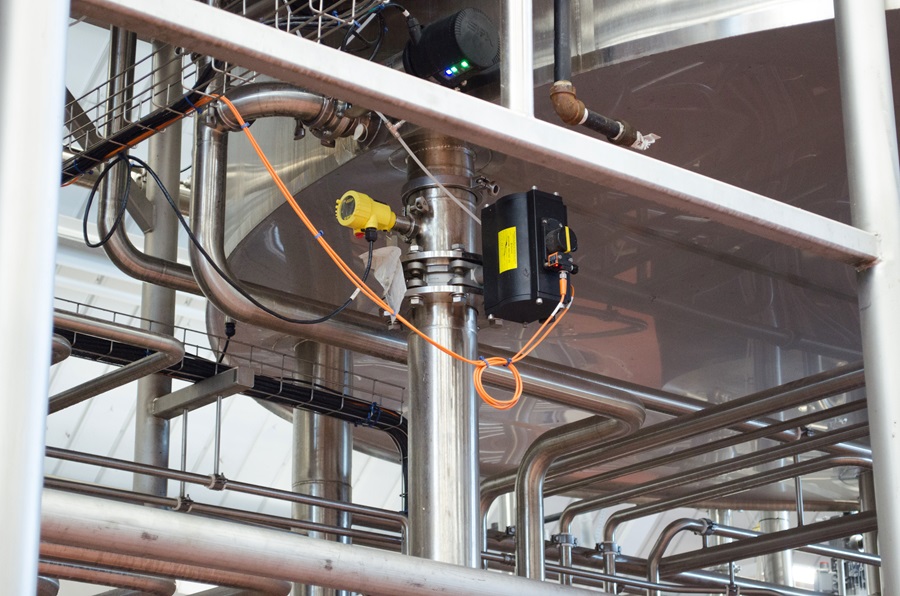 Wort is brought to a boil for 60-90 minutes at temperatures ranging from 208 to 214° F inside a large kettle. Hops are added at different times and at different quantities depending on what beer is being brewed in that batch. For example, MadTree’s Psychopathy IPA requires more and different hops than its Happy Amber Ale. Knowing the volume inside the kettle is important for tracking steam system efficiency, as volume is used to measure steam rate. MadTree uses a VEGABAR 82 to compare volume from before and after wort is boiled to ensure optimal efficiency.

From the kettle, wort goes to the whirlpool, the last stop in the three-vessel brewing system. Inside the whirlpool, temperature drops to 195° F and the centrifugal force inside the tank draws the solids to the center, forming a cone of hops and protein solids. The brewhouse employs a VEGA pressure transmitter to measure liquid inside the whirlpool where it sits for a time while hops are added to impart flavor and aroma without harsh bitterness. When it’s ready, the finished wort is pumped through a redundant filtration system to remove any solids. A heat exchanger drops the liquid’s temperature to 69° F in preparation for yeast to be pitched and fermentation to begin.

Once wort leaves the trio of vessels in the brewhouse, automation stops and craftsmanship begins. But that doesn’t put an end to MadTree’s commitment to innovation and data in pursuit of beer perfection.

"Pressure is one of the most reliable measurements you can have. It’s as true as you can get.”

Fermentation: where beer is made

Wort is hard-piped to one of MadTree’s fermentation tanks, which range in sizes from 100 barrels to 400 barrels. When wort enters the fermentation tank, it arrives at a certain density. As yeast reacts with the wort’s sugar, it produces carbon dioxide and alcohol. The reaction decreases liquid density, and the Production Team measures that density in real-time with an electronic differential pressure (EDP) system. VEGA’s ceramic-celled pressure transmitters give them a virtual window in the fermenter.

“This gives us the ability to track the viability of our yeast as we use it. We monitor actual yeast performance and how well it creates alcohol. We’re looking at everything from one batch to the next. We reuse a pitch of yeast for multiple generations [batches]. As we reuse it, there’s more stress and strain placed on the yeast; it’s more pressurized, it loses cells, and its viability starts dropping. We track the performance of the yeast through every generation. We can see when it’s going to die off so we know exactly when to get a new pitch in to maintain the quality of the beer.”

MadTree is looking for consistency with this measurement. Every MadTree beer has to taste the same whether someone orders a pint in the Taproom or picks up a six-pack at the grocery store. Using the density output, the team plots fermentation curves, monitors yeast performance over time, and compares yeast generations to ultimately brew a consistent, delicious beer.

Before installing the VEGA EDP solution, maintaining the integrity of the yeast—and by extension, the beer—was far more labor-intensive. Lab staff took a sample from the fermenter every day, tested the density in a lab, and recorded their findings. Now, the team pulls a density reading every minute. They could get this same data using a tuning fork-type instrument, but MadTree opted for a flush-mount sensor to devote more time to brewing and less time to cleaning and maintaining instrumentation.

“I don’t like physical contact of the tuning fork. Why not have a flush disc to measure pressure? Pressure is one of the most reliable measurements you can have. It’s as true as you can get.”

The temperature is controlled inside the fermenter until it is dropped to 62° F for dry hopping. MadTree’s dry hopping method consists of injecting hops pellets into a line that feeds into the fermenter. After dry hopping, the fermenter crashes to 32° F, solids drop to the bottom of the conical tank, and beer is run through a large centrifuge to rid it of any lingering solids before it is sent to the brite tank for storage. 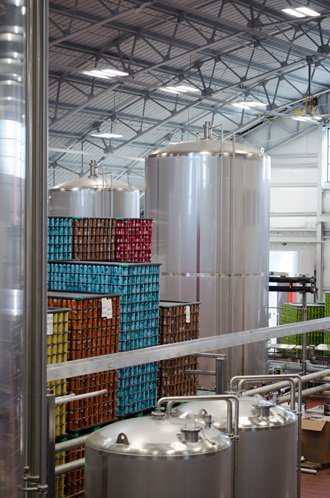 The last stop before MadTree beer is ready to be shared with the community is the brite tank. To keep an eye on the tank’s liquid level and CO₂ head pressure, Moore uses a pair of VEGABAR 82 instruments, one for each measurement. In addition to knowing what’s happening inside the brite tank, these values are used to track downtime during packaging: When the level stops moving in the vessel, the canning line does as well. Logging the downtime helps Moore improve process efficiency.

The MadTree brite tank presented VEGA with an opportunity to improve its processes for future partnerships with breweries and other beverage producers. Beer inside the brite tank is cold but the air outside the tank is warm, creating condensation on the pressure transmitter’s measuring cell. The pressure sensors include a filtered vent open to atmosphere that compensates for the varying atmospheric pressure on top of the fluid in a vented or open vessel. In a sense, the pressure instrument works like a balance scale with atmospheric pressure in one weighing pan and the total hydrostatic pressure in the other. But when condensation exists, the accuracy and repeatability of the measurement is vulnerable. The vent can become clogged and deliver an incorrect output, as it did in MadTree’s case.

With fewer than two miles between VEGA and MadTree, VEGA product experts and field service technicians worked together to create a solution and outfitted the brite tank with pressure transmitters equipped with absolute pressure cells that compensate for atmospheric effects in another way. Moore was impressed with the speed VEGA deployed its solution.

“That’s one of the benefits of having VEGA around the corner. If there is a problem, I can make a call or send an email and you guys are here within a day.”

The next round: yeast measurement

Remember that yeast used to eat wort and create beer? MadTree calls its stainless steel yeast storage vessel “Mother Mary.” Currently, they track the flow out of the yeast tank and they plan to install a VEGAPULS 64 at the top of the tank to track yeast level in real time.

One more for the road

MadTree plans to scale their production and distribution incrementally over the next few years. That means more tanks in the brewery, more bars and stores selling MadTree, and more community-building through beer. VEGA is happy to be a trusted instrumentation supplier to an outstanding Cincinnati brewery.

This article was originally published in May of 2018.

See more images from the plant tour below! 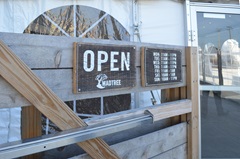 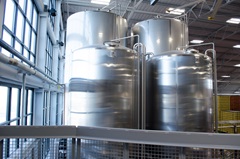 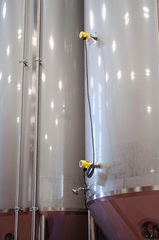 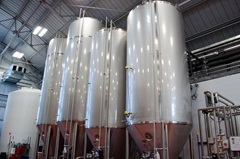 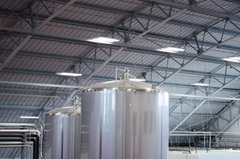 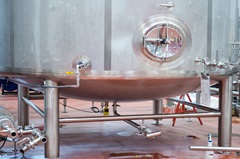 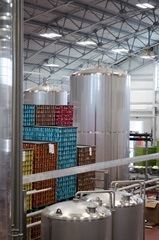 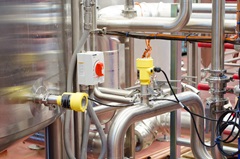 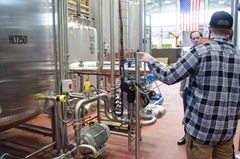 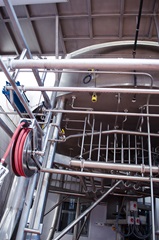 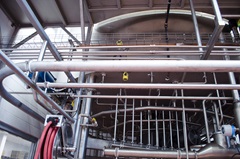 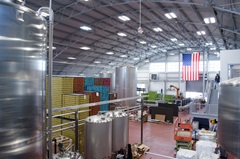 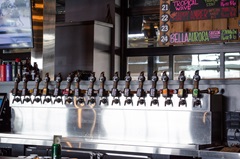 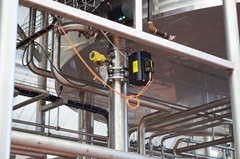