The new radar sensor VEGAPULS 64, with its high signal frequency of 80 GHz, has opened up new options in contactless level measurement applications that were previously considered extremely difficult.

When VEGAPULS 64 was introduced to the market in 2016, even specialists were surprised at how many possibilities this new instrument created. The reaction was the same two years earlier when the first radar transmitter for bulk solids, was launched, which also operates at the same high frequency of 80 GHz.

The crucial difference from previous radar level measuring instruments is the frequency: 80 GHz instead of the usual 26 GHz. This allows a focusing of the radar beam that is more than three times better, which in turn has a whole series of positive effects on the measurement. The very narrow measuring beam has a positive effect not only in applications with numerous tank internals, but also in applications with media that until now could not be readily measured with radar technology due to their poor reflectivity (very low dielectric constant). Even in applications with foam, extremely turbulent product surfaces, condensate or build up on the antenna, the higher measurement certainly now guarantees more reliable measuring results. 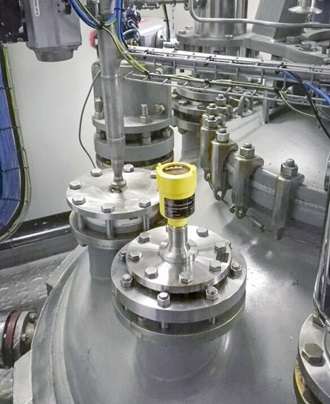 Suddenly, applications that hadn’t even been considered before became possible. In many plants in the chemical industry, for example, the trend now is to complement point level detection with a redundant, continuous measurement as well. However, because in the past the installation costs for this were usually too high, most plant operators decided to simply do without. VEGAPULS 64 is a continuous measuring instrument that can be installed and put into operation quickly and easily. The radar sensor can be easily installed on smaller, longer existing nozzles and connections, so the preparations for modifications are minimal.

Measuring instrument does not always have to be ‘calibrated’

In many processes in the chemical industry, much of the instrumentation requires to be verified and calibrated; for various reasons like taxation, high value products, accounting purposes perhaps batch traceability and/or for process validation. These specially calibrated measuring instruments are usually specialist, large, expensive, and above all, time-consuming to set up and commission. So the question is; Do these measurements always require a high-precision, calibrated instrument? For example: In large chemical plants, metered flows are usually measured with such a device for purposes of accounting and invoicing. But level measurement in storage tanks does not necessarily have to be the same – it only has to be accurate enough to ensure that inventory stocks meet supply requirements, that's the safety of vessel capacities are observed and perhaps as redundancy for these higher accuracy metering systems. 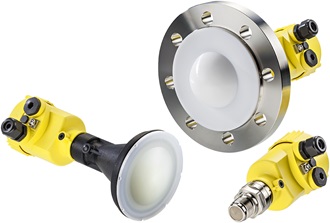 VEGAPULS 64 is available with different antenna systems and can be used in a wide variety of applications.

The technical background: on large scale or high value product chemical storage tanks, ‘fiscal’ calibrated level measuring systems are usually calibrated directly at the tank, which involves a very complex procedure. What is more, the temperature of the medium has to be measured at different places in the tank to compensate for the overall thermal expansion/contraction of the liquid and the vessel itself. Also, due to the high accuracy requirements, the tank pressure must also be monitored. Nonetheless, many tank operators are now turning to VEGAPULS 64 as a back-up or redundant system. The non-contact, highly focused radar level measuring instrument operates with an accuracy of +/-2 mm, over ranges up to 30m, independent of pressure, temperature or the composition of the medium.

However, in many whiskey distilleries the situation is different, the taxable alcohol is accurately measured by compact radar-based instruments from VEGA. These are linearized with specialist tank calibration charts. Before the whiskey is filled into wooden barrels for long-term maturation, it is stored temporarily in stainless steel, securely padlocked spirit vats, which are under ‘customs and excise’ control. Radar sensors are the perfect solution for precise measurement of the quantities in these spirit storage vats.

Thanks to its high precision, VEGAPULS 64 was also able to deliver a convincing performance at a South African pharmaceutical company. To ensure sufficient process accuracy, the manufacturer of azathioprine and mirtazapine had previously used flow measurement to meter in the exact product quantities into this agitated vessel. However, this method was always a balancing act. The problem: in order to introduce the substances into the vessel, it had to be opened. Since the pressure is 3 bar and the temperature between 120° and 130° C, the vessel had to be vented and depressurized before each filling. But this meant the safety of the operating personnel could not be guaranteed during this process. So a rethink was necessary: although flow rate measurement is normally the better alternative for measuring exact quantities, due to the heavy build up inside the vessel, the company decided to install the non-contact radar sensor VEGAPULS 64. Despite the agitator, which spins at 25 to 40 revolutions per minute, along with condensation caused by heating of the medium, VEGAPULS 64 measures the volumes of  the added material quantities reliably and with sufficient accuracy. 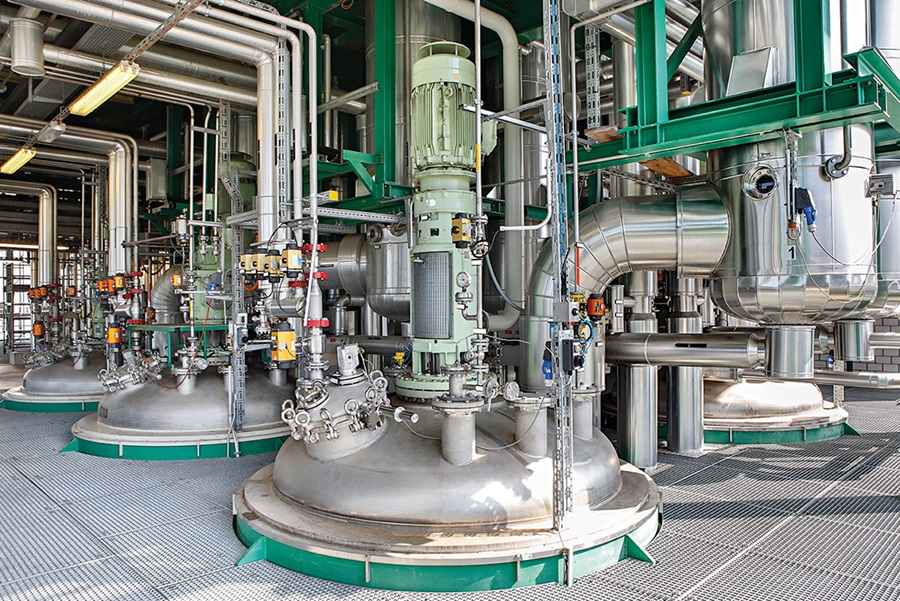 On the wavelength of small containers

Higher accuracy brings benefits even in small containers. VEGAPULS 64 was designed to significantly reduce interfering signals in the near range. Although the blocking distance, i.e. dead band, of some radar sensors is considerably smaller than that of, for example, ultrasonic sensors, in certain cases it is still too large for applications in laboratories and research facilities. 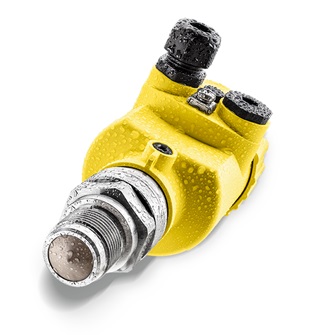 The smallest antenna is no larger than a 1-euro coin. This makes the instrument ideal for installation in small vessels.

Now, with the antenna system of VEGAPULS 64 integrated into the process fitting, it no longer projects into the container. This allows measurement right up close to the process fitting and vessel top, maximising available volume. It can measure right down to the bottom of the vessel too, even with liquids with low dielectric values. This is how: In the case of media with low dielectric constants, some of the signals penetrate the medium and reflected back by the vessel bottom. This generates two signals: one from the actual liquid level and another from the vessel bottom, this can cause problems due to the lower reflective properties of the liquid with low dielectric, and a stronger reflection from the higher dielectric (metal) vessel bottom. This causes inaccuracy or a premature ‘jump’ down to zero or empty even when there is still liquid left. But this issue is now resolved by the significantly shorter wavelength of the 80 GHz signals from VEGAPULS 64. Its signals are more strongly attenuated by the liquid medium than is the case with previous 26 GHz sensors, so they don't penetrate so strongly. As a result, the reflection from the bottom of the vessel is significantly weaker, enabling the radar to follow liquid levels much closer to the vessel bottom.
VEGAPULS 64