A large oil field service company needed to measure the density of the sand slurry being injected down through the fluid delivery system during the hydraulic fracturing process.

Hydraulic fracturing, also known as fracking, is the process of injecting liquid and materials at high pressure to create small fractures within tight shale formations in order to stimulate well production of oil and gas. This occurs after the drilling has ended and the drilling rig and derrick have been removed from the site. The process takes about three to five days, on average, to complete from start to finish. Once the fracturing operation is finished, the well is considered “completed” and is now ready to safely produce oil or natural gas for years, even decades, to come.

In this company’s fracking operation, a sand slurry is mixed at the front end of the process and injected into the well at pressures as high as 15,000 PSI. Understanding the density of the sand slurry mixture is critical to completing the job in the most optimal way. Seeking a density measurement solution that would provide reliable data, they turned to VEGA for their long history and expertise in radiometric non-intrusive density systems. 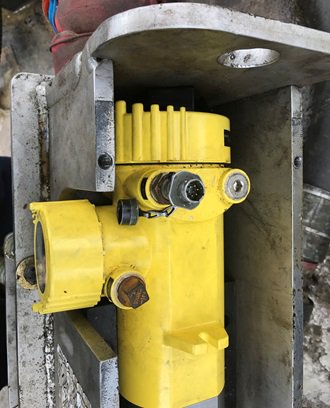 MiniTrac 32 is particularly suitable for applications with extreme vibration

An active well site is a carefully orchestrated operation that runs 24/7. In this particular company’s case, the well site typically operates for 3 hours, with only 30 minutes between stages. The high pressure of the injection makes it impossible to access the optimal metering position while fracking is in progress. This created a challenge, as it provided only a limited window of time – the 30 minute reset between stages – to install any sort of measurement instrumentation.

Fracking well sites are known for high vibration, so any measurement instrumentation would need to obtain accurate readings independent of these conditions. VEGA provides density measurement to many oil field services applications, from the blender truck to the typical 3-4” PUP lines. These locations are also known for high vibration, and so the experts at VEGA knew the perfect sensor for the job: the MiniTrac 32 radiometric sensor.

MiniTrac 32 is particularly suitable for applications with extreme vibration.

VEGA’s MiniTrac 32 is a rugged density measurement sensor specifically designed to work well in applications involving extreme vibration; it accomplishes this through double-encapsulated electronics and a ruggedized scintillator. But it wasn’t just the vibration resistance that appealed to the company: the MiniTrac 32 features Bluetooth connectivity for easy wireless configuration and visualization. That meant readings from the sensor were always visible, even while the sensor was physically inaccessible during the injection process.

With such a limited window of time to set up the sensor, preplanning and testing were critical to ensuring a successful installation. VEGA’s experts worked with the company to preinstall and test the MiniTrac 32 before placing it at the end of the fluid delivery system.

To determine the measurement results, VEGA trended the data remotely from the operations trailer by using the MiniTrac 32’s built-in Bluetooth capability to wirelessly view the information in PACTware on a technician’s laptop.

In the graph below, the blue line (inline PPA) and the green line (VEGA-calculated PPA) track each other, denoting that the MiniTrac 32 tracked the sand slurry to the expected density.

After careful planning and successful testing, the VEGA team was able to install the sensor on the system, powering it up and mechanically securing it within the allotted 30 minutes.

The oil field services company continues to employ the MiniTrac 32 system today, and has since purchased more VEGA equipment for their operations. In VEGA, this company chose not just a provider of reliable measurement sensors, but also a partner in continuous process measurement success. The MiniTrac 32, with its extreme vibration resistance and Bluetooth capability, gave the company just what they were looking for in a sensor, but the decision to partner with VEGA went deeper than that. Even as the pandemic rattled supply chains across the globe, VEGA put in the work to ensure high product availability and industry-leading lead times for instruments used by fracturing operations, instilling its customers with the confidence that VEGA is able to deliver in the face of adversity. Just as key to this company’s repeat business is VEGA’s outstanding service network; from expert field service technicians to a 24-hour hotline and the myVEGA online platform, VEGA works hard to keep its customers’ operations running at their best.