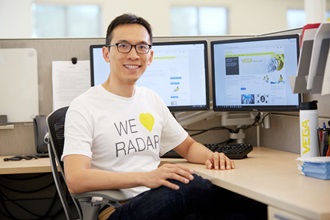 Tell us about your road to VEGA. How did you end up here?
I’m from Taiwan and I got my undergrad degree there. I came to America in 2006, and I spent my first year in Houston, learning English and searching for a school to get my MBA. I was trying to find a location without too many Chinese people so I would be forced to speak and learn English quickly but I didn’t want to go to a school in the middle of nowhere. I still wanted to have a social life. During my search, I found Xavier University in Cincinnati, Ohio.

Xavier had exactly what I was looking for: An affordable business school with a good reputation located in a midsize city. So after a year in Houston, I moved to Cincinnati in 2007 and started my MBA program in 2008. In early 2010, right before second semester, I decided it was time to get an internship. Lucky for me, Xavier was holding a career fair. That’s where I was introduced to VEGA.

The person in the VEGA booth told me all about radar gauges and other measurement instruments. I knew nothing about them; it was kind of intimidating. But he said one key word that interested me: Nuclear. I had no idea you could use nuclear material in measurement tools. I went back to my dorm room after the career fair and checked out VEGA online. It seemed pretty cool, especially the stuff about nuclear measurements. I said to myself, “This is really interesting. I have to apply for this.”

Back then VEGA was looking for someone who could speak another language. This was great for me because I am very familiar with Chinese culture and I speak Mandarin. There is a huge market for VEGA products in China’s oil and gas industry, so I knew VEGA was a good opportunity for me. I interviewed and got the job. I started my internship in 2010 and held onto it until early 2012 when I graduated with my MBA.

What happened then?
After I graduated, VEGA hired me but because I am not an American citizen, I had to apply for a work visa. That’s a complicated process with a lot of steps to follow and a lot of paperwork. I was told at the time that each year there are about 65,000 working visas issued but about 100,000 people who applied for them. It was kind of like a lottery; you were either one of the 65,000 who got a visa or one of the 35,000 who didn’t. That year, I was one of the ones who didn’t.

I’m not sure if this is still true, but at the time I applied if you missed out one year you’d be moved to the front of the line if you applied again the following year. VEGA told me they would hire me if I could wait, but I didn’t want to waste a whole year, so I went home to Taiwan. Within three months I found a job in China with Asian Pulp and Paper (APP), the world’s largest pulp and paper company in terms of production. While I worked at APP, I actually went to the factories and I saw VEGA radar gauges and VEGA nuclear weight scales. Even though I was on the other side of the world I had a lot of interaction with VEGA products. I would describe that as a very successful year for me: I got to travel, gained work experience, and learned what customers look for in a measurement solution. After eleven months at APP, my U.S. visa was issued and I came back to work for VEGA.

It sounds like you could have stayed at the paper company in China. Why did you come back to VEGA?
The reason I came back here is that I love the culture here and the people here. 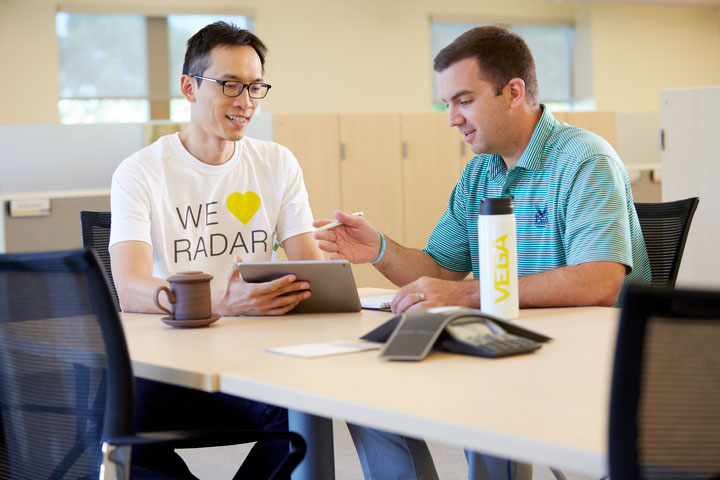 As a VEGA product specialist, Alex's work is highly collaborative.

You’re a project specialist. What does that mean? What is it you do?
Think of a project bid as a big pie that you have to put together one ingredient at a time by a certain date. My typical day is coordinating with other departments and groups: Engineering, Purchasing, Shipping, Order Management, Product Management, VEGA Germany, and other partners. Every project involves a huge amount of work and each project is different. A project bid might be due in a month or three months and in that time there is a lot to do, so one must practice good time management. That’s the typical project specialist job. But my job is different.

The typical project specialist spends 95% of their time in the office. I travel probably four times a year to customer sites in China to interface with Chinese customers. I spend two weeks at a time there so I arrange as many projects as I can before I go so I can take as many meetings as possible. I might spend a week with the VEGA Business Development Team and visit with licensors. The next week I might be traveling around China with our area representative meeting with EPC firms and end users. It’s a great opportunity to help maintain relationships with our Chinese customers and partners.

How did the launch of the VEGAPULS 64 affect your daily work?
VEGA was famous for radar before the VEGAPULS 64 and a lot of customers were in the habit of sending in model codes for VEGAPULS 62 and VEGAPULS 63, radar sensors that had been working for them for years. I had to spend some time explaining that we have a wonderful new product that fits big and small process connections and has a high transmission frequency for better focusing. I also made a point to tell them that DK value doesn’t matter anymore because process material doesn’t affect the accuracy of the VEGAPULS 64. After I told the customers all the benefits, they were very interested in trying it.

What does the development of measurement technology like the VEGAPULS 64 tell you about VEGA?
It tells me that we spend a lot of resources to provide innovative products so we can be first to market. We aren’t as big as some of our competitors, but we were still the fastest to develop a high-frequency radar sensor for liquid level measurement. That’s impressive.

See what Alex is talking about: Learn more about the VEGAPULS 64
What do you like to do in your free time?
My free time I like to exercise. I played basketball for my school team when I was in Taiwan. I played center in Taiwan because at six feet, I was one of the tallest players. I used to play basketball for fun three days a week when I was at Xavier. I still love to play, but I don’t have as much time as I used to so I only play about once a week. 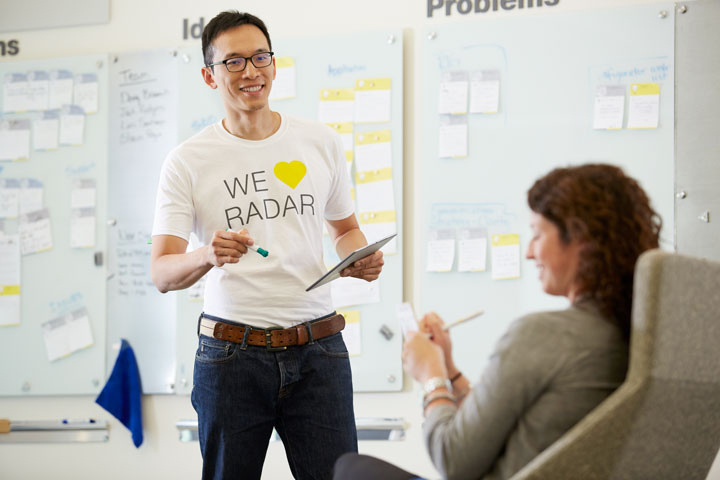