Guided wave radar reads through buildup in the sulfur pit: Application of the month 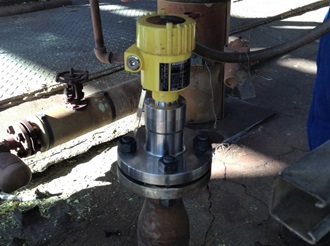 Oil refineries take raw crude oil and convert it into usable products for other industries and consumers. From beginning to end, a lot of unwanted substances are removed, some of which are dangerous, corrosive, or both.

Overcoming a variety of challenges

Inside the sulfur pit, temperatures are elevated to prevent the sulfur from solidifying. However, if the temperature is upset, the sulfur can vaporize and crystalize. This results in excessive buildup throughout the inside of the sulfur pit, including on any level measurement instrumentation.

Buildup on most level measurement sensors results in a measurement error or a complete failure, leading to reduced efficiency in the sulfur recovery unit and eventual maintenance, repair, or replacement. The elevated temperatures and the chemical properties of the sulfur only add to the difficulties of this measurement.

The liquid sulphur, which comes directly from the sulphur recovery plant, is stored in underground concrete pits. High temperatures are required to maintain the sulphur in its liquid form. The harsh, corrosive process and environmental conditions in sulphur pits require dependable level measurement.

Unaffected by buildup or condensate

A robust sensor thrives in a difficult environment: VEGAFLEX 81

Guided wave radars like the VEGAFLEX 81 are able to measure level through excessive buildup because of how the technology works. A low amplitude, high-frequency microwave pulse is sent downward into the sulfur pit along a transmission probe. Once the pulse reaches the surface of the molten sulfur, the signal is reflected back to the sensor electronics, which uses the time of flight to calculate level. 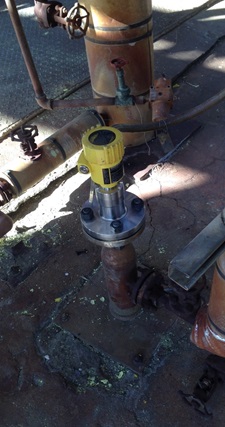 The VEGAFLEX 81 uses either a rod or cable probe in sulfur pit applications. As sulfur builds up on the probe, the microwave pulses begin to slow down as they travel down the probe. This slight change alters the time of flight, and operators may notice a small measurement discrepancy – one which is exacerbated at lower levels in the sulfur pit, but minimized at higher levels. This inconsistency due to the buildup can easily be accounted for and corrected.

As with any build up situation, sulfur crystallizes and builds up on the probe inside the sulfur pit until eventually, the buildup becomes too heavy and falls off. What remains is the amount of buildup that will be on the probe for the life of the instrument. It’s at this point shortly after installation, operators can recalibrate the sensor to get a more accurate level reading throughout the entire measurement span.

A reliable and accurate level measurement in the sulfur pit is critical due to the dangerous nature of the application. The VEGAFLEX 81 guided wave radar provides a solution where other technologies struggle and even fail due to the heat, corrosiveness, and excessive buildup of the molten sulfur.