Close
Note: The following text is an abridged version of the LinkedIn post by Johann-Martin Krebs, hydrologist and morphologist at the Federal Waterways and Shipping Administration and former lecturer in coastal engineering at the Technical University of Darmstadt.
➡ To the original article 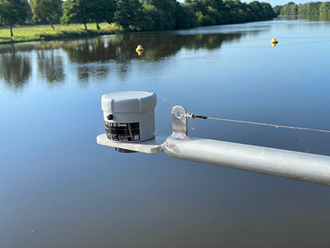 At first glance, the topic of water level gauging in rivers and lakes doesn’t seem to be one that would "knock the socks off" users of measurement technology. However, the successful test phase of three VEGAPULS Air 41 radar sensors in the Ems estuary – i.e. the area where the river flows into the sea – impressed Johann-Martin Krebs of the Federal Waterways and Shipping Administration so much that he dedicated a very interesting article to the topic on LinkedIn.

The backstory on water level measurement 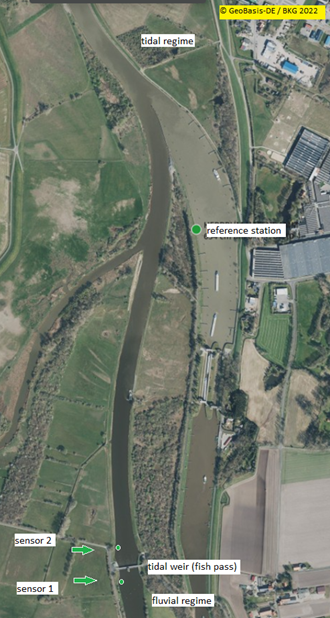 Water level measurement in the Ems estuary is extremely challenging. Pressure-based measuring systems have problems with the density changes caused by the high sediment concentrations in the water column, which can be up to 200 grams or more per litre, especially in the upper estuary. For that reason, almost all level gauging stations are equipped with non-contact radar sensors. Generally speaking, estuaries are usually very large in area. And the associated mud flats often require the use of rather light equipment for a level survey. Large distances make mobile communication a limiting factor, which leads to problems in transmitting data in real time. The autonomous VEGAPULS Air sensor functions well under such conditions and, in the case of this test, it sent mobile data to the web server with almost 100 % reliability.

The Federal Waterways and Shipping Administration used these radar level sensors, which were originally developed to measure liquids and bulk solids in IBC containers, for general water level measurement. A sensor of this type only takes up “as much space as a grapefruit” and has the ability to transmit data either via LTE NB-IoT or alternatively via the free LoRaWAN network which can offer long-range transmissions with low power consumption. With batteries that last approx. 4 to 5 months, the water level can be transmitted to VEGA Inventory System every 15 minutes. Visualisation, download or configuration can be carried out at any time – even on the move via the app for IOS and Android.
The simple installation of the sensors also turned out to be a huge plus. Their 80-GHz technology enables accurate surface measurements with a very narrow beam angle that limits any interference from false echoes. In the project example shown below, the measuring range with a sensor in a position perpendicular to the surface is between 1 and 5 meters. VEGAPULS Air 42 even has a range of up to 30 metres, which can be an advantage during a storm surge, for example. 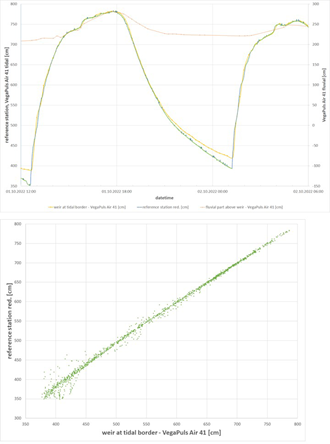 The purpose of the project is to collect water level data for the eco-hydraulic planning of a fish ladder. Due to the strong tidal asymmetry of the river Ems, the smallest possible measurement transmission interval of 15 minutes was used. The high water phase comes quickly here, i.e. within one to two minutes, the water level can start rising up to a few decimetres per minute. Every 7 seconds, the sensor measures the level with very high precision and saves the data together with the GPS time coordinate. Instead of doing a linear interpolation of the subsequent measurements, an alternative approach is taken, using a nearby reference station that records the minute values and the correlation between the sensor and the reference station. This station is fully redundant and measures every minute. It is continuously monitored and calibrated with the water level gauge. The readings are compared directly with the data from the sensor positions.

Not only was it possible to create a reliable database this way, but also to evaluate the new, versatile sensors for possible future projects. Thanks to the quick installation and setup, the period of minimum flow in the summer of 2022 could be recorded very quickly and inexpensively. If the low water period had been missed, the planning process would possibly have been delayed by a year, increasing the project costs significantly as a result. 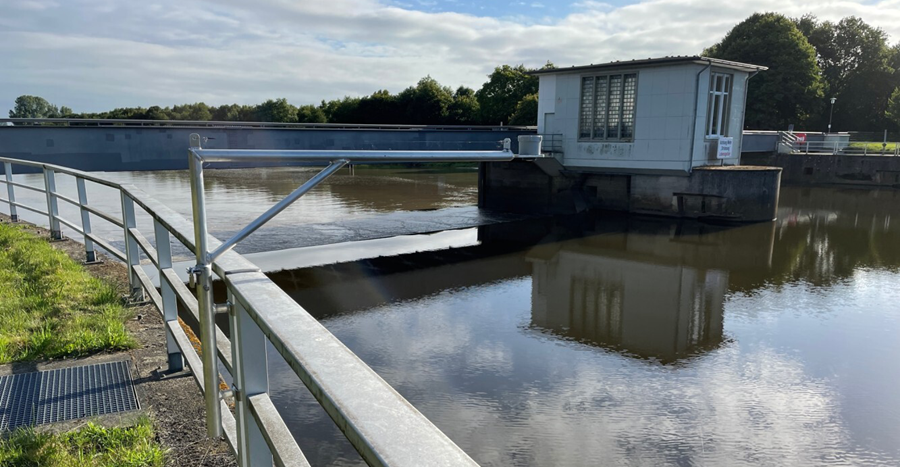 All expectations were met and the project left a lasting impression of the sophisticated, easy-to-use measurement technology:

“Beside the amazing experiment it made possible, this small but impressively well-designed instrument from VEGA provided us with high-quality data and new insights into the water level dynamics around the tidal weir. Furthermore, the test resulted in an interesting and constructive collaboration between engineers, fish experts and ecologists from the Lower Saxony State Office for Water Management, Coastal Protection and Nature Conservation (NLWKN),” said Johann-Martin Krebs in conclusion. 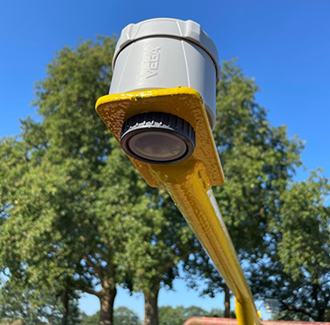 The experiment showed convincingly that the autonomous VEGAPULS Air 41 sensor is suitable not only for level measurement in mobile bulk solids silos and liquid tanks, but also for water level gauging in estuaries. With its simple installation and reliable operation without external power, it represents an attractive, cost-efficient solution.