Award for VEGA: Isabel Grieshaber is "EY Entrepreneur Of The Year 2022"

Isabel Grieshaber was awarded in the category "Family Business" in Berlin. 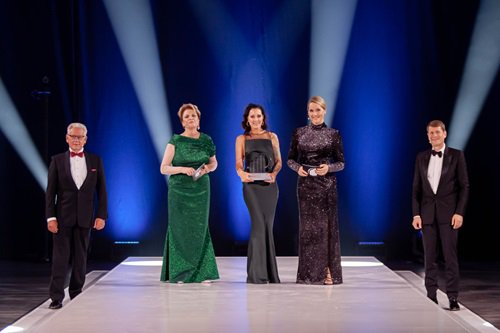 On 24 November 2022, the auditing and consulting firm EY presented the business award "EY Entrepreneur Of The Year" in Berlin. During the award ceremony, Isabel Grieshaber for VEGA Grieshaber KG was named best entrepreneur in the category "Family Business." The laudatory speech honouring VEGA was given by Prof. Dr. Ulrike Detmers, Managing Partner, Chairwoman of the Management Board of Mestemacher Management GmbH and spokeswoman for the Mestemacher Group.

VEGA was one of 36 companies that reached the final. The winners were announced in the evening in the Verti Music Hall. Journalist and news anchor Judith Rakers moderated the event. An independent jury selected the entrepreneurs for the title "EY Entrepreneur Of The Year 2022" in the categories "Family Business" (VEGA Grieshaber KG), "Innovation" (va-Q-tec AG), "Sustainability" (JobRad Holding AG) and "Young Companies" (air up GmbH). In addition, an honorary prize was awarded for exceptional entrepreneurial and social commitment.

The "Entrepreneur Of The Year" programme was launched in 1986 by EY in the USA. Since then, the competition has established itself in 60 countries and is one of the world's most prestigious entrepreneurial awards. This year marked the 26th time the competition, supported by renowned companies and media, was held in Germany. LGT, Frankfurter Allgemeine Zeitung and manager magazin are among the many supporters. Besides awarding successful entrepreneurial personalities, EY also promotes young entrepreneurs with the "EY NextGen Academy" programme.