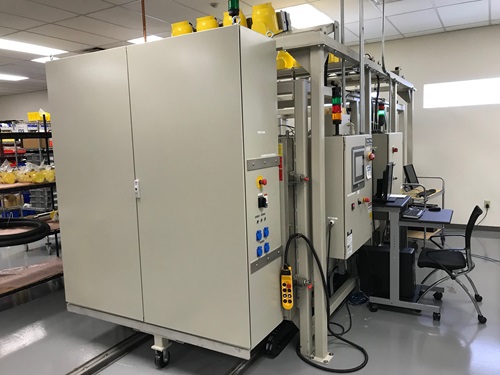 In Cincinnati, Ohio, VEGA Americas worked with Cincinnati Sub-Zero to construct the chamber itself.

At the same time, VEGA’s world headquarters in Schiltach, Germany built the software while another German company, Voltec, provided the hardware.

“The broad scope of this project led to building stronger relationships with many colleagues at VEGA in Schiltach, as well as a local vendor, and a German supplier. It was especially interesting hosting two people from Voltec and VEGA’s Daniel Schmider from Germany, and having the opportunity to get to know them and learn more about their culture,” said Baughman.

The manufacturing facility at VEGA Americas is already seeing the benefits of the new equipment.

This chamber heats up faster and works more efficiently, so testing times for most SoliTrac, PoinTrac, and MiniTrac sensors have been cut from two days to two and a half hours, though longer tests are still available for SIL sensors and other special circumstances.

The new software is the same software used at VEGA’s German manufacturing facility, providing a new level of consistency for VEGA radiometric sensors everywhere. Plus, the software upgrade allows tests on multiple sensors at the same time using a single computer, freeing up space.